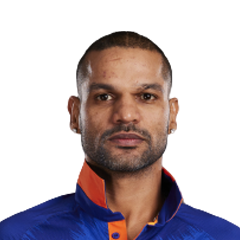 Shikhar Dhawan first made waves at the 2004 U-19 World Cup, amassing 505 runs from seven innings to become the leading scorer, after which many prophesied good things for him and he didn’t take long to live up to his reputation with heavy runs in domestic cricket. However, unfortunately for him, it was during a time when the national team was full to the brim with world-class players and it was next to impossible to break into that team.

His patience and good performance, however, paid off in October 2010 when he was called up to the Indian team for three ODIs against Australia. As ill luck would have it, two games were abandoned due to rain and in the second match he had a nightmare of a debut by scoring a two-ball duck. The next chance for him came in mid-2011 against the West Indies but he failed to impress much in the four ODIs he played with scores of 51, 3, 4 and 11. After that many wrote him off, saying he didn’t have it in him to make it big in international cricket. However, consistent performances at the domestic level helped him keep his place in India’s second tier of players. All he needed was some rub of the green and that came during the 2013 Test series against the visiting Australians.

The out-of-form Virender Sehwag was shown the door for the third Test and Dhawan made his Test debut in Mohali. And guess what! He grabbed the opportunity with both hands, scoring 187 off 174 balls, also earning the distinction of fastest hundred by any batsman on debut – off 85 balls. In the ICC Champions Trophy in June 2013, he scored two tons in India’s triumph. He once again shone in the 2015 World Cup in Australia where he was India’s highest scorer and played a big role in the team’s semi-final appearance. His career had an up-and-down phase post that but it was once again in an ICC event that he showed that he had it in him. He was the top run-getter in the Champions Trophy 2017.

In the Indian T20 League, he began with Delhi but switched alliance to Mumbai in the following season. It was with Hyderabad though where he came really good. He was a consistent performer for them since the franchise’s inception in 2012. Shikhar was also instrumental in their title triumph in 2016. In the 2019 auction, Dhawan was again picked by Delhi and in the following season, Shikhar had a fruitful outing as he became the first batsman in the history of the League to score back-to-back hundreds.

Although Dhawan's international career hit a roadblock, he continued to show good form in the Indian T20 League. During the mega auction before the 2022 edition, Punjab secured his services for INR 8.25 crores. It was during this season that Dhawan played his 200th game in the League and also became the second batter after Virat Kohli to complete 6000 runs in the Indian T20 League.