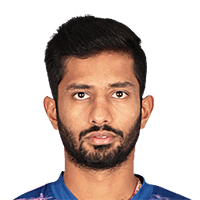 Rahul Tripathi is a flamboyant right-handed batter with almost all the shots in the book one can ask for. His ability to keep the game moving and be busy at the crease is one aspect that makes him stand out. Another aspect is his flexibility as a player. He can bat at any position and can play the waiting game as well as press the accelerator when needed. Along with all this add to his CV, his brilliant fielding, and there you are with a complete package.

Born in an army family, Rahul had discipline in his blood and that surely has played a big part in his cricketing journey so far. He started playing cricket professionally in the Deccan Gymkhana, Pune and slowly started making his name. He played for Maharashtra at the U-15 level and had a fruitful stint at the U-19 level as well and that brought him into the senior Maharashtra side. He made his List A debut for Maharashtra in 2010 against Baroda while his first-class debut came against the same opponent two years later. However, his performances were modest for his state side.

There was something about Rahul Tripathi that caught the eyes of the Pune franchise and he made his debut for them against Delhi in the 2017 edition of the Indian T20 League. The youngster grabbed the opportunity with both hands playing a crucial role at the top of the order in their journey to the final that year. That season brought him into the limelight and gave him much-needed confidence in his game.

The breakthrough season in the Indian T20 League translated into performances for his state side as well and he was the leading run-scorer for Maharashtra in the 2018-19 Ranji Trophy. He then went on to play for Rajasthan, Kolkata and Hyderabad in the Indian T20 League. His performances for Kolkata and Hyderabad especially grabbed a lot of eyeballs.

Finally, after a stupendous performance with the bat in the 2022 season of the Indian T20 League where he scored 413 runs for Hyderabad at the strike rate of 158.24, he was drafted into the Indian T20I squad for the tour of Ireland and was also subsequently included in the ODI squad for the tour of Zimbabwe in 2022. His ability to mould his game according to the game situation makes him a big asset for any team he represents.