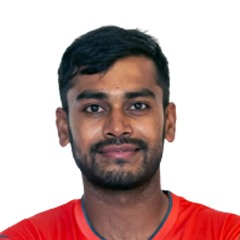 Mehidy Hasan Miraz is known for his heroics with the red ball. He is a right-arm off-break bowler who also is a handy batsman down the order. Hasan showcased his brilliance with the ball right from his teenage days. Even though his parents wanted him to continue his studies, Hasan had other plans for his future. At a young age of 16, he was determined to become a cricketer and represent his nation one day. Mehidy's effort and skills at the age-level cricket earned him the position of the captain of the Bangladesh U-19 for the 2014 U-19 WC at a tender age. In the following year, he made his first-class debut for the Khulna Titans as well.

In the 2016 edition also, Mehidy was named as Bangladesh U-19 captain for the U-19 WC and the tournament was a life-changing one for the all-rounder. Mehidy was outstanding throughout and his all-round efforts led to his team finishing third on the points table. He made headlines after grabbing the Player of the Tournament award. His top form continued in the following domestic season as well as he was unstoppable with the ball and grabbed 30 scalps at an impressive average of 16.43. Player of the Tournament in the U-19 WC followed with an outstanding domestic season ensured him a spot in Bangladesh's Test squad.

Mehidy Hasan made his Test debut in October 2016 against England and commenced his international career with a bang. He started with a five-wicket haul on his debut and showed a lot of promise. His performance went uphill and in the following Test match, he picked two more 6-wicket hauls and left the England batsmen stunned. His amazing performance helped Bangladesh clinch their maiden win against England in Tests and Hasan was named as the Man of the Series for his outstanding bowling performance.

Later in 2016, Mehidy failed to perform well in New Zealand. In their following one-off Test match against India, he finally found some rhythm with the bat and scored his maiden Test half-century against the likes of Ravindra Jadeja and Ravichandran Ashwin. 2017 was a remarkable year for the Bangladesh Cricket team as they registered their first wins over Sri Lanka in Sri Lanka and against Australia at home. His contribution in both the series was enough to cement his position in the Test playing XI and also earned him the opportunity to represent Bangladesh in the green jersey as well.

Mehidy was handed his maiden ODI cap against Sri Lanka in March 2017. Impressed with his ability to pick wickets regularly and bowl tighter spells, Hasan got the chance to make his debut in the shortest format of the game in April 2017 against the same opposition but went wicket-less and got out on a golden duck which helped Malinga get a hat-trick. He had a miserable South African tour later in 2017 where he failed to pick a single wicket even after bowling more than 60 overs in the match but in spite of his poor performance, the selectors backed the young all-rounder.

The off spinner improved his bowling in the limited formats of the game and gradually became a regular member of the Bangladesh side in all the formats. After some excellent performances in late 2018, Hasan was named in Bangladesh's 15-man squad for the 2019 World Cup.